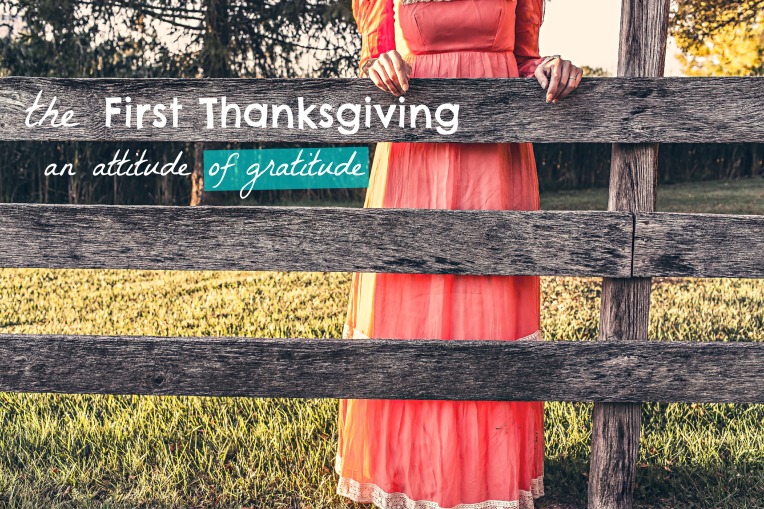 We’ve all heard the story. We make pilgrim hats and dress our tables with turkey. But Thanksgiving is more than just Pilgrims and Native Americans eating together in harmony. It’s more than positive thinking and counting our blessings. Perhaps we’re so familiar with the story that we forget what really happened. Before the big feast.

Though it’s been told a thousand times, this story is near to my heart. It’s not just an American story. It is my story. You see, my relative was there that First Thanksgiving. He was one of those pilgrims who sailed the Mayflower, braved the new world, and shared a meal with the Wampanoag Tribe. A man who started a long line of descendants in the land of the free and home of the brave. To me, this is not just a story on a page in a history book. It really happened. To real people. To my family, generations ago. To a man who experienced real emotions, tragedies, and fears.

The Mayflower voyage can be summed up in a few sentences. They sailed, they landed. No big deal. But that doesn’t quite do it justice. So let me put it into perspective…

The voyage was risky. It demanded bravery. It was dramatic. And it had major problems from the get-go. 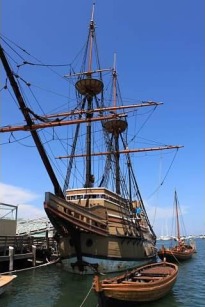 102 pilgrims swelled with excitement. Adventure. A new beginning. Determined to make their mark in the New World. Two ships set sail but immediately one of them started to leak. So they turned back. If at first you don’t succeed…cram all the passengers meant for two boats onto one ship. Can you imagine? From the very beginning, things weren’t going as planned. With only one working ship in tow, the pilgrims crammed in mass on the Mayflower. Meaning there were tighter quarters. Less elbow room. More rations. Increased conflict.

If that wasn’t bad enough, almost everyone had the queasies the entire trip. Sea sickness at its finest. And conditions were rough. The ceiling was so low that anyone taller than 5 feet couldn’t stand upright. It was cold, dark and damp. Water everywhere. And the only clothes you had were the ones on your back. Can you imagine the smell? Not to mention the filth.

Then the storms hit. Due to the delay (thanks to the leaking ship), the Mayflower crossed the Atlantic during peak storm season. Lightening, thunder, wave upon massive wave rocking the ship to and fro. As if that helped the tipsy tummies. The main beam started to leak, disease became rampant, someone washed overboard and was lost at sea. One passenger made it his mission to antagonize the sick and poor, making jokes about casting them overboard. Squabbles ignited between passengers. The crew contemplated returning home, “rather than to cast themselves into desperate and inevitable peril”. Can you imagine the fear rising? The desperation and despair? The panic?

At this point the pilgrims could have called it quits. Thrown in the towel. Determined life in England was at least better than no life at all. They were completely powerless and vulnerable to the shadow of death. They were truly afflicted, with no promise of relief in sight. Any light at the end of the tunnel was bound to be another train.

I’ve been there. I know what it’s like to start out with excitement and hope for the future only to encounter storm after turbulent storm. Dreams shattered, plans obliterated, bruised and battered by the winds of disappointment and despair.

But what I love about this story is the continued response of these weary travelers. It is written they passed the hours praying, singing, and talking about their future. Their lifted voices echoed by the winds and the rain. When all seemed lost, they pressed on.

“So they committed themselves to the will of God, and resolved to proceed…and being thus arrived in a good harbor and brought safe to land, they fell upon their knees and blessed the God of heaven, who had brought them over the vast and furious ocean, and delivered them from all the perils and miseries thereof.” – William Bradford

I love this description. I imagine them throwing themselves upon the shore in a huge sigh of relief, kissing the ground in their deliverance.

Instead of giving in to hardship and despair, they found hope. Not in their situation, but in God. They trusted Him for their provision.

But their troubles weren’t over. Their plans to head south were hindered. They exchanged rounds of fire with the Natives. They spent the winter housed on the very boat they were desperate to disembark. More than half survived the Atlantic only to die anchored in the harbor those first few months. Out of 102 passengers, only 51 of them made it to spring. Many buried their spouses and children. What loss and grief to bear after they had already suffered so much!

This was supposed to be the land of opportunity. Of freedom and new beginnings. But in less than a year the pilgrims experienced mostly hardship, disease, and death. Yet at the end of that year they dedicated a three day festival to celebrate God’s providence:

“And God be praised we had a good increase…Our harvest being gotten in, our governor sent four men on fowling, that so we might after a special manner rejoice together after we had gathered the fruit of our labors.  At which time, amongst other recreations, we exercised our arms, many of the Indians coming amongst us, whom for three days we entertained and feasted. And although it be not always so plentiful as it was at this time with us, yet by the goodness of God, we are so far from want that we often wish you partakers of our plenty.” – Edward Winslow

How could this be? After they had suffered so much, how could they be so thankful? So joyful?

Ironically, it is the reality of death that makes us thankful for life. Hope in the midst of loss generates a true attitude of gratitude.

Thankfully, happiness is not a prerequisite to finding joy. The pilgrims understood this. Their journey for freedom was not without cost or sacrifice. But instead of ignoring the bad and focusing on the good, they allowed their bad to point them to One who is good. Their loss and grief served as a reminder of their blessings. They trusted God for renewed strength and hope. As a result, real joy flourished right in the thick of pain and suffering.

These are the events that brought them to the table. These were the thoughts impressed on their minds and hearts as they celebrated and gave thanks to God. Their joy was a heart response to hope. They had survived. And God had proven faithful.

So let their story shine a light on yours this Thanksgiving. “As one small candle may light a thousand,” William Bradford wrote, “so the light here kindled hath shone to many, yea in some sort to our whole nation.”

Romans 5:3-5: We can rejoice, too, when we run into problems and trials, for we know that they help us develop endurance. And endurance develops strength of character, and character strengthens our confident hope of salvation. And this hope will not lead to disappointment. For we know how dearly God loves us.

Citations: Of Plymouth Plantation by William Bradford &  Mourt’s Relation: A Journal of the Pilgrims in Plymouth by Edward Winslow